The Strategic Power of Moral Force 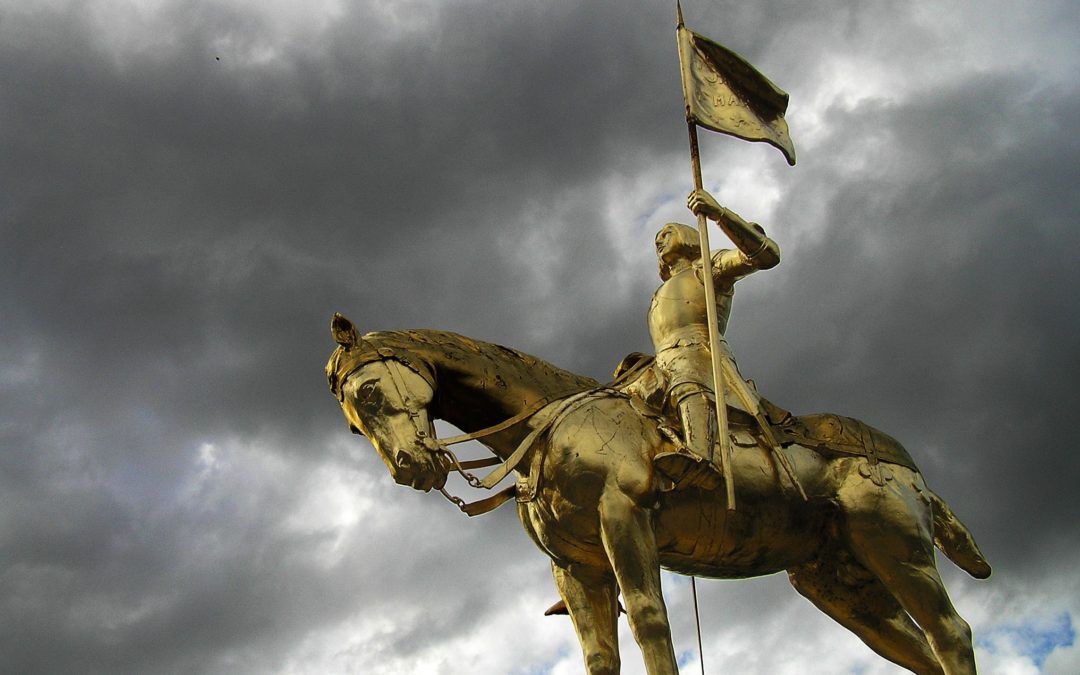 My wife is from New Orleans, so when we recently got a chance to see the original, we had to stop.

We were driving through France with our kids, on a four-day tour from my family reunion in Germany to our AirBNB in Barcelona, when we realized we’d pass through the “original New Orleans”: Orleans. This is the first town that Joan of Arc helped free from an English siege during the Hundred Years’ War, when England was taking over large swaths of France.

Orleans is filled with statues of Joan of Arc in armor, wielding a sword. But as I learned more about her true story I was dumbfounded … then inspired. Her true path to power, the reason she was able to change the course of history, offers an indelible example of fundamental strategic principle, one that can help you and your organization change the future as well.

You see, Joan of Arc never wielded a sword. She felt her banner was “forty times” more effective.

A banner beats a sword.

She was born a peasant, never learned to read, but claims she had visions from saints who told her she was destined to free France from England. At the age of 16 she won a private conference with Charles VII and explained that God had sent her, that without her presence France would lose the war.

By this time France had endured humiliating defeats at the hands of the English. Morale was low. Hope was fading. And in their desperation, the royal leadership gave this illiterate teenage girl a test. They sent her to Orleans to see if she could help lift the English siege.

She had no formal power. Indeed military leadership of Orleans excluded her from their military strategy meetings. But over time, her message, that God wanted France to win, that she represented God’s will, won over.

She essentially turned the Anglo-French conflict into a religious war.

On the front lines she wielded not a sword but the French banner. She inspired French soldiers and citizens. She gave them meaning, hope, something bigger worth fighting for.

The Prussian general and military theorist Carl von Clausewitz would say she gave the French “moral force.” Sun Tzu understood this principle, arguing you should march soldiers deep inside enemy territory to remove the option of defeat, thereby unifying them. The 36 Stratagems, the ancient Chinese book on which my first two titles are based, talks of seeking a situation where others benefit by you winning.

You see, a common, unifying, bigger mission unifies people to achieve the impossible.

Today’s most successful businesses are winning through “moral force.” If you have heard my speeches or attended our Outthinker workshops, you know how Alibaba, Amazon, Ikea, and MasterCard all activate moral force. Your vision, core purpose, mission, or “big hairy audacious goal” are all tools to help you do this.

Are you effectively activating moral force in your organization? Are you fighting for something bigger than profits? If not, here are three steps you can take to energize your organization toward a higher goal:

Look through your activities and seek to remove any that produce a negative outcome for society. Sustainability efforts that seek “zero net carbon” or “zero net waste,” for example, seek to do this. Ikea’s People & Planet program, for example, looks to ensure zero waste in its supply chain, by removing any process from which waste is not reused or recycled. What negative activities can you remove?

Find ways to adjust your business model and practices to produce positive outcomes. Start by considering the Toms Shoes model of giving away a pair of shoes for each one they sell, for example, but go beyond this. Ikea is switching their entire lighting range to energy-efficient LEDs, and sourcing all of the cotton they use in their products from more sustainable sources. Walmart has been focused for decades on reducing costs for customers by removing packaging materials from their suppliers, which is good for the environment. Look for opportunities to profitably do good in the world. What positive outcomes can you add?

Often your organization produces positive outcomes that your employees, customers, investors, and partners are unaware of. MasterCard, for example, talks about being a “force for good,” arguing that as they pursue a “world beyond cash,” they create greater transparency and accountability in the economy. How can you more effectively communicate the good you do?