Entrepreneurship Inside the Box: Glass Cubes at MIT and Blowout Parties in the Alps 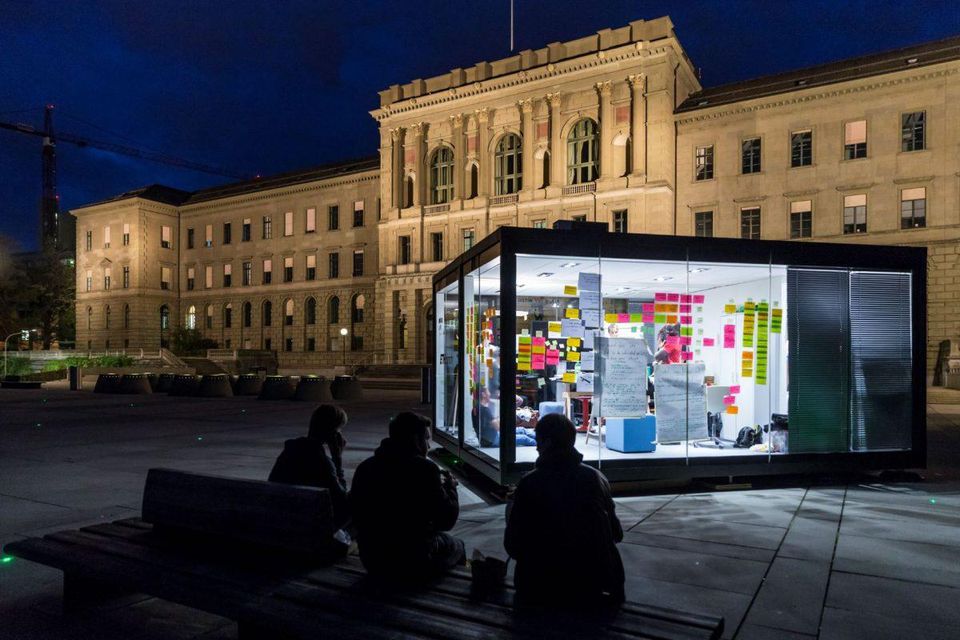 Polyball is apparently Zurich’s blow-out party of the year. It’s hosted by the country’s top school of science and technology, ETH, the university where Einstein got his start (and rarely attended class). While this lovely irony reflects the city’s, uh, party scene, the students at ETH assured me it’s quite an experience.

Fortunately for Zurich, ETH is more than just a party school. It turns out ETH students are up for just about anything— including locking themselves in a glass cube for a long weekend to generate new business concepts.

I recently visited with the ETH graduate students behind the InCube “entrepreneurial hackathon.” The local government asked ETH’s Entrepreneur Club how to enhance the visibility of entrepreneurship in Switzerland. As ETH Entrepreneur Club board member and executive mentor, Barbara Ruebel, explained, “The students took the challenge literally.” They proposed a 16’x16’ glass cube displayed in public where a team of aspiring entrepreneurs would stay for four days and emerge with a new business concept. They described it as, “from problem to prototype in a weekend.”

Local officials “thought we were a bit crazy at first, but they let us try it,” as materials science masters student Philippe Nicollier, one of the InCube leaders, recalls. The first iteration generated so much student engagement and public curiosity that the club expanded the program to other locations around Switzerland, including the capital Bern and tony mountain resort Crans-Montana (the winner for most distracting views), each sponsored by a corporate partner.

Then InCube showed up at MIT in Cambridge, Massachusetts. Signe Lin Kuei Vehusheia, an ETH materials science graduate student from Norway, shared the story with MIT during her term there working on “colloidal systems and using rheology and confocal imaging for characterization.” (Look that up!) Her MIT colleagues couldn’t wait to lock themselves in a glass box. In September, the MIT Innovation Initiative placed a Cube in pride-of-place “facing the iconic Ray and Maria Stata Center” on campus. The InCube team is now exploring plans for 2019.

During my visit, I also met with local business leaders endeavoring to enhance Switzerland’s innovation success. Everyone I met asked, “Why don’t we have more entrepreneurship?”

I hear this question all over the world. Factors vary by location, but there are a few places that, based on most indicators, have outsized opportunities to create the future. Switzerland is one of them. The country has exceptional minds, world-leading intellectual property, nearly unlimited capital and global leading companies such as Nestle and Novartis. Oddly, prosperity can be an impediment. Zurichers enjoy exceptionally low unemployment and high wages in general. Entrepreneurship is tough and takes drive, determination and risk. Anil Sethi, entrepreneur-in-residence at ETH and one of Switzerland’s top tech entrepreneurs, reasoned, “entrepreneurs take risks, and it’s tough to take big career risks when things are good.”

For true entrepreneurs, comfort isn’t enough. The students with whom I met– from Norway, China, Germany and Switzerland–are engaged in activities from vacuum-enabled high-speed transportation to a vision technology startup. Like young people worldwide, they’re eager to make an impact. Not all will become entrepreneurs, but the most ambitious, creative and committed will go where it’s possible to make big things happen.

According to the students, while global press lauded the InCube experiment, hometown press expressed more caution, even skepticism as to whether real business opportunities might emerge from glass cubes. This suggests one reason entrepreneurship isn’t as active in Zurich as it could be. The point of InCube isn’t to generate billion dollar businesses. It’s to intrigue the public and energize students—some of whom will eventually create billion dollar businesses and even change the world.

In Zurich, things are generally great. But for students like Philippe and Signe, if they don’t find big enough opportunities in town, they’ll leave– no matter how great the parties.

*This article originally appeared on Forbes.com on Dec. 1, 2018.