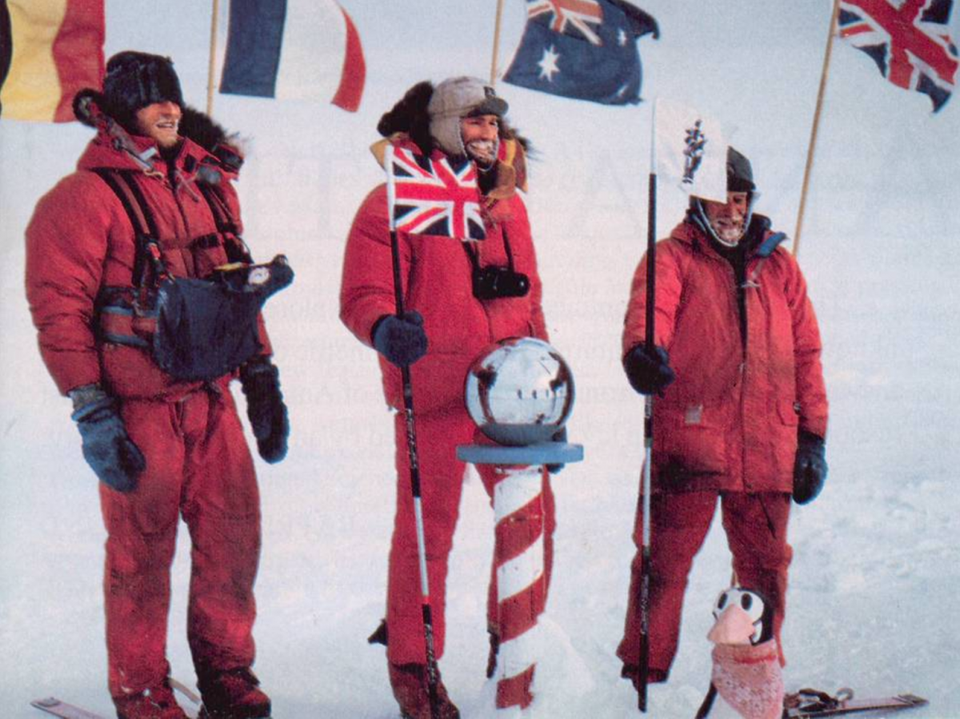 In 1986, when Robert Swan first reached the South Pole after a 70-day, 900-mile walk — leading the first team to do so — his irises bleached by ultraviolet radiation passing through the newly opened hole in the ozone, he reported having had two thoughts: “We’re not dead,” and “Now what?”

The question of why loomed ever-present. Recently, Swan discussed with me how his mission evolved over fifty years. “When a lad, I read about Ernest Shackleton and other polar explorers. I thought, ‘I want to do that!’ To accomplish something dramatically dramatic. It also seemed like a good opening line with women. I learned later how ridiculously hard this would be. It couldn’t just be a cheeky lark. Fortunately, I also discovered how inspiring insanity could be… for humans in need of saving the planet.” (See Rob Swan’s remarks at TWIN Global 2018.)

Swan’s experience illustrates what some traditions have known for millennia and science increasingly validates— the best purposes are both selfish and selfless.

This is a contradiction to live by.

As a thought experiment, consider pursuing only one. Making all decisions based exclusively on personal gain risks alienating others and thus underperforming. A canny Ayn Rand sycophant might argue that selfishness pursued at the expense of outcomes reflects faulty calculation or execution. Selfish purpose is always best because it is authentic and durable. Altruism is a chimera, so avoid chasing it.

However, an exclusively selfish purpose ignores research validating the advantages of altruistic behavior (see this meta-study). Pursuing purpose beyond one’s self contributes to a greater reported sense of meaning in life.

Conversely, biasing all decisions in favor of others at one’s own expense might hinder motivation and engender self-neglect. Altruism practiced to an extreme can be to the individual’s detriment.

Rather than self-seeking or self-sacrificing, practice selfish selflessness.

Traditional societies mostly defined people’s roles by social hierarchies, heredity and convention. Even our place in a divine universe. The West’s Classical, Christian heritage asserted The Great Chain of Being, in which all of God’s creatures existed within a strictly layered hierarchy at whose apex sat an all-knowing, omnipotent God. As such guide posts shift or even disappear, we each acquire the opportunity and enormous burden to define our place in the world.

While some individuals report living a fulfilling life without clarity of purpose, extensive research supports the notion that having a sense of purpose confers significant benefits for both happiness and meaning. The John Templeton Foundation commissioned a meta-study of six decades of researchregarding the nature of human purpose. They research team concluded, “People who lead lives of purpose tend to be both psychologically and physically better off than those who do not.”

Having clarity of purpose enables focus, perseverance and people’s reported sense of meaning in their lives.

Attention is every individual’s most limited resource. As I’ve explored elsewhere, attention is an unrelenting, ethical question. Without a notion of purpose— what you’re seeking and why– it becomes difficult to thoughtfully allocate attention via anything beyond immediate survival and base desires.

Every moment, unlimited possible objectives exist. Most don’t much matter. In our careers, we are faced with apparently urgent challenges, many of which add little value when resolved. Clarity of purpose helps select what to prioritize and what to ignore.

Practicing selfish selflessness could be key to staying the course. In some cases, a sense of purpose might even help us survive.

I’m a faculty member of Abroad, a team helping immensely accomplished people understand what purpose, happiness and contentment mean for them. After a recent Abroad “quest” to Bhutan (see a brief video here), one of our participants— an exceptionally accomplished individual— remarked, “This trip saved my life.” He wasn’t exaggerating.

Austrian psychiatrist and Holocaust survivor Vicktor Frankl, author of Man’s Search for Meaning, exemplified the power of combining personal interest with selfless purpose. Frankl reported enduring hellish captivity by encountering everything as a scientist and therapist—his field of passion– and envisioning he might one day survive to share his insights. As he explained, “Those who have a ‘why’ to live, can bear with almost any ‘how’.”

Research confirms that living a life with purpose leads to a greater sense of meaning. Stanford professor Jennifer Aaker and her colleague Emily Esfahani Smith, author of The Power of Meaning, report on an extensive review of scientific, philosophical and literary sources of the past few hundred years. “The defining features of a meaningful life are connecting and contributing to something beyond the self, which could be your family, your work, nature, or God.”

Considering the personal benefits of pursuing purpose, one might question how selfless such actions really are. But does this distinction matter, when both the individual and the world might benefit?

Existentialist philosopher Albert Camus asserted the absurdity and meaninglessness of a life devoid of God or eternal truths or values. Even quite faithful people can commiserate with Camus’s plight and perspective. In The Myth of Sisyphus, he compared man’s life with the plight of the Greek mythological figure Sisyphus, doomed forever to the devoid task of pushing a boulder up a mountain, only to witness its eternally recurrent descent. Rather than despair—or suicide — Camus proposed the response to absurdity requires revolt, freedom, even passion. He concludes, “The struggle itself toward the heights is enough to fill a man’s heart. One must imagine Sisyphus happy.”

We each have the opportunity, perhaps the responsibility, to create meaning out of apparent meaninglessness. Whether for your God, passions, family, tribe or planet, these are choices we all face in a wide open universe. Purpose represents both the question and the quest.

Robert Swan’s son Barney, infected by genetics and his father’s colossal spirit, decided to join the family business—titanic feats inspiring humanity to save itself. Last year, to underscore the urgency and opportunity to save our one planet’s environment, Team Swan trekked to the South Pole using only renewable energy. Confronting reality at 60, Rob had to be airlifted out mid-journey and returned near the pole. Barney and team persevered, and Rob plans to eventually complete the portion he missed.

As Rob lamented and celebrated, “Sometimes will and reality collide. It’s then you’ve got to be all in, for yourself and for something bigger.”