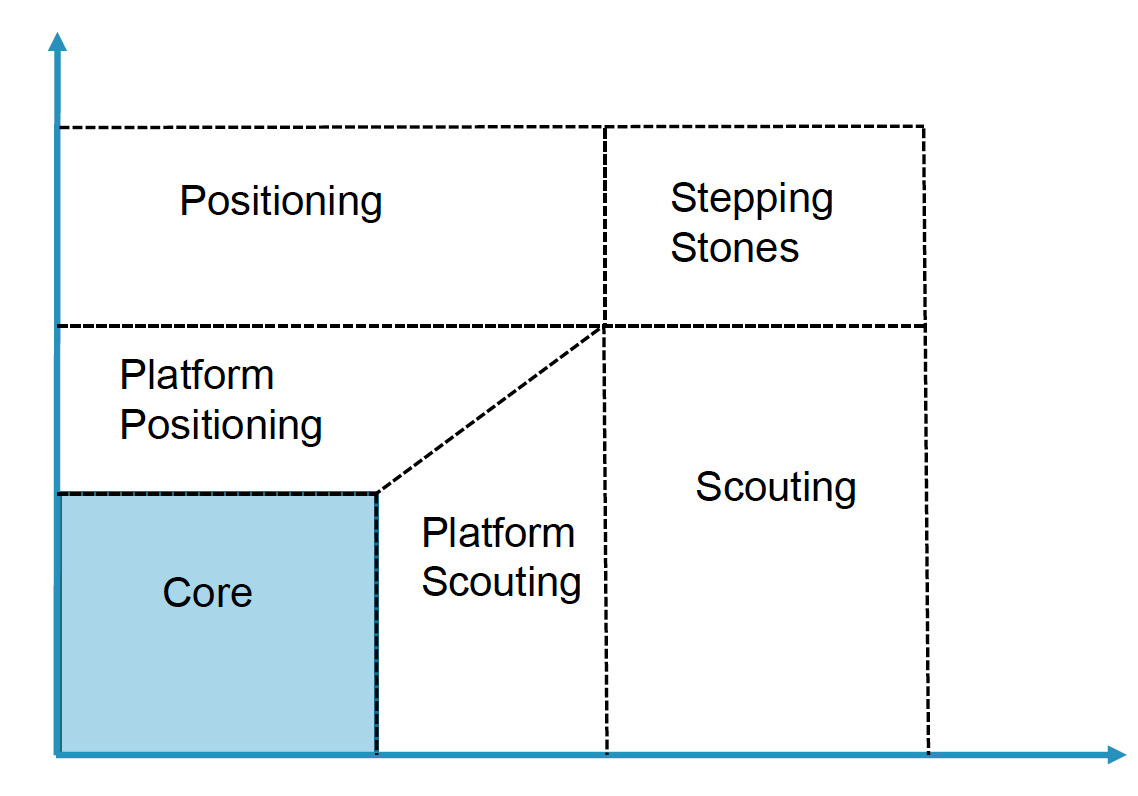 When you ask why large companies have a problem building an innovation proficiency, you get back all the usual suspects: “We have silos.” “It’s nobody’s job.” “We’re afraid of failure.” “It’s unpredictable.” And what do all of these things have in common?

Every single one of them is self-imposed.

While there are some true barriers to innovations—rules, regulations, laws of physics—by and large, the biggest roadblocks are the things we do to ourselves. Now, they’re usually done for very good reasons—they serve the core business, perhaps they were important at one point in time, or there was some sort of technological constraint. But what we don’t do enough of is ask ourselves: Are these things still relevant? Or is it actually time to get rid of them?

One of the keys to lifting those barriers to innovation is portfolio management. Now, if you think about the value you create as a manager, when uncertainty is really low, you can use all of the standard metrics we teach in business school to measure progress—because you know what you’re doing and yesterday is going to predict tomorrow. As you move up in uncertainty—get into new technologies, new business models, new markets—the value that you are creating needs to be thought of in terms of “option value.” Option value is defined as the right, but not the obligation, to make a future decision. And the value of the option is the value of that right. Instead of looking at things like present value, we need to be asking: Relative to my investment, what’s the possibility this opens up to me? Am I going to have more and better choices?

One of the first steps in developing an innovation strategy is evaluating opportunities with something I call the Opportunity Portfolio. This is an analysis that maps projects you’re considering investing in relative to the uncertainties they face, ultimately revealing which investments are supporting today’s business and which position your organization for the future.

In the core business, uncertainty is really low—you know more or less who your customers are and how you’re going to serve them. The stuff you’re doing that’s new in the core is making the business of today better. These are things like Six Sigma programs or digitizing a customer portal. However, equally important in the core is disengagement from the things that have come to the end of their life and need to be stopped. If you commit to continuing everything you’ve ever started, you’re never going to have the resources to do new things. When Satya Nadella joined Microsoft, he inherited this massive mobile phone business. He took a look at it and determined that Microsoft was never going to retain dominance in mobile and that the technology was at the beginning of the end of its S-curve. So he shut it down, took a $7 billion right-off, and invested in new kinds of technologies like the cloud. Where would Microsoft be today if it was still pouring money into mobile? Nowhere. And he saw that.

Next are the candidates to be your next generation core business. If the major uncertainty is technological, you need to figure out your positioning, and if the main uncertainty is the market, you need to figure out what it wants. An example in the positioning category is Amazon Web Services. After building the technology it needed for itself, Amazon then turned around and realized that other companies might have that same need and there just might be a market. Jeff Bezos green-lighted it and sent the team off to Florida. They developed the idea, did some pilot testing, and the rest is history. On the other end of the spectrum, an example of a platform in the scouting space is Adobe. Its transition from selling software in shrink-wrapped boxes to selling software by subscription in the cloud is a pretty significant market transition. And in the early stages, the company’s existing customers hated it. Five thousand of them actually banded together and signed a change.org petition opposing the shift. But the company had the courage of its convictions and ended up picking up new customers who couldn’t afford the old model, thereby radically expanding its customer base.

In the options space, this is where your investments are going to lead to results, but you’re not quite sure what they are yet. A positioning option is the type of investment where you say, “I have a feeling there’s going to be a demand, but I’m just not sure which aspect of this is going to work.” This is about placing a few calculated bets on what might happen in the future. A current example is XR technologies. Right now, you’re starting to see companies placing their bets on what’s going to happen with these technologies, which have dozens of potential applications—some of which we can’t even envision yet. When it comes to these options, you’re placing bets on a solution space, but you don’t know which solution is going to be the one.

With a scouting option, you have some sort of solution that you want to take into a new market. The major challenge isn’t figuring out the technology, it’s figuring out the market fit. As an example, one of my clients is a company called Varo Money, whose mission is to help income secure, cash flow challenged young people build wealth. It’s branchless, all on your mobile phone, and intermediated by a chatbot named Val. The question came up among the project team: What kind of personality should Val have? What will millennials want? There were two conflicting approaches: one team thought it should be casual, similar to how users communicate on Venmo, and the other team members thought it should be more like a traditional bank. So we gave the two teams $1,000 each to test their hypotheses. As it turns out, when it comes to your financial future, you want to be treated like a grownup. And with that insight, Varo was able to move forward. So, this is not an investment in the business yet—it’s an investment in learning.

The scariest piece in this whole portfolio are the truly transformative things. You don’t have a clue how to do it, you don’t know if anyone wants it, but the long-term opportunity is irresistible. In those cases, my recommendation is to find a smaller market, where somebody needs something you can actually produce, and treat it like a stepping stone. It’s not a huge investment yet, but it could be down the road.

A great example that’s playing out right now is autonomous vehicles. We’re strapping sensors on a Volvo and hoping for the best. But Lockheed Martin has found a stepping stone with the military. When you have troops at the front lines that need to be supplied, you’re going to have trucks driving out in harm’s way.  While autonomous vehicle technology can’t replace those troops, it is smart enough to play follow the leader. That’s not true autonomous. That’s not the ultimate big market. But it’s a step.

You might ask yourself: What’s the right ratio of all these types of opportunities? At a recent Innovation Roundtable, I shared my insights on how to analyze if your opportunity portfolio reflects your strategy, along with the four things that need to be in alignment for innovation.