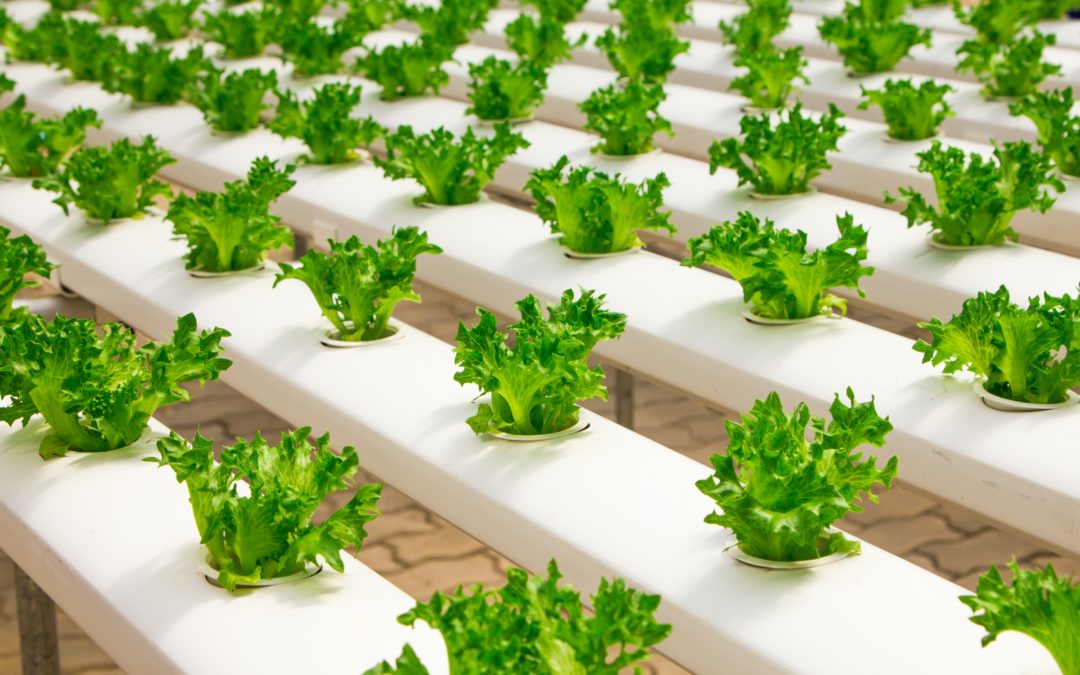 On my ride up to Vermont to ski each winter, I follow a path through Connecticut, Massachusetts, and New Hampshire. While the route is mostly bordered by traditional farms, there is one that looks more like a secret lab. From a complex of large semi-translucent warehouses emanates an eerie blue light that reflects the trees and clouds. This looks more like the scene of science-fiction movie than a farm.

In such indoor, vertical farms, being constructed all over the world, a farmer is able to fully control the environment in which plants grow. You can simulate almost any environment you want by controlling light, temperature, humidity, and soil nutrient levels. Growing a tropical plant such as cassava or plantains in the icy temperatures of Vermont suddenly becomes possible. In addition, because pests are unable to fly onto your crops, they require far fewer, if any, pesticides.

By growing vertically, you can plant more plants per acre. But one of the primary advantages of indoor farming is speed. Since you can create the ideal conditions for a plant any time of the year, you can grow year-round. After harvesting one crop, you can immediately plant the next, without having to wait for the next season. As a result, crops can grow twice as fast, using 90% less water.

Indoor vertical farms suddenly separate farms from geography, allowing the production of crops to move ever closer to point of demand.

Freight Farms, a Pennsylvania-based innovator, is taking a slightly different approach. Rather than operating indoor vertical farms, the founders seek to enable others to become vertical farmers. They started helping people build rooftop vegetable gardens but soon decided that to have the impact they desired, they would build fully equipped vertical hydroponic farms in shipping containers.

Their units contain sophisticated systems to measure water conditions and automatically release nutrients as needed, lighting systems that mimic the precise pattern of sunlight that crops need, and temperature control to maintain optimum growing conditions. Anyone with enough free space for a container can purchase, install, and run a Freight Farm and, as of the time of this writing, after six years in operation, the company has empowered over 500 farmers, in 44 US states and across 26 countries.

Their internet of things (IoT) sensors continually track data and feed information to farmers through a mobile app. In collecting this data – they have over 2 billion datapoints so far – they are also able to learn and improve indoor farming using artificial intelligence.

A Brooklyn-based startup aims to bring farming even closer with the introduction of the first consumer-facing vertical farming unit. Farmshelf, founded in 2016 out of the WeWork Food Labs accelerator program, has developed a bookcase-sized farming system to promote vertical farming in our own kitchens. The device is already being using in a number of New York City restaurants and hotels.

Now, Farmshelf home users will simply be able to plug in the device, connect to wifi, plant seeds in pods, and then use an app to monitor the hydroponic plant system. After the initial $4,950 investment in the system, a monthly subscription fee covers supplies and access to the software to keep the farm running.

Next step: merging of proximity technologies

In 2017 one in three Americans were already growing some of their food at home. The indoor farming industry is projected to reach $40.25 billion US by 2022. The future points to a merging of proximity technologies that will bring farming of food closer to our homes and families.

3D printing has already been used to print a vertical farm with an internal irrigation and drainage system. This may allow mass customization (and a lower price point) for consumers who want to bring farms into their living spaces. An Italian startup, Hexagro, is 3D printing connectors for its consumer-facing automated indoor gardens.

To see where farming may be headed next, imagine what it looks like when the distance between production of food and the point of demand approaches zero. Could it be that the busy parent, while she is still driving home from work, will have a machine that knows her dietary preferences predict what meal she will want ready for her children, begin printing it from ingredients grown in her backyard hydroponic farm, so it is waiting for her when she gets home?